This is a really heavy post to write, but I thought I should document it, as I did receive some messages from pawrents whose furkids are about to make the transition over. I hope you read this with an open heart and mind. ❤️ (I'll also be adding more videos/photos to this post later on, for my own memory lane, and for further reference for some of you.) 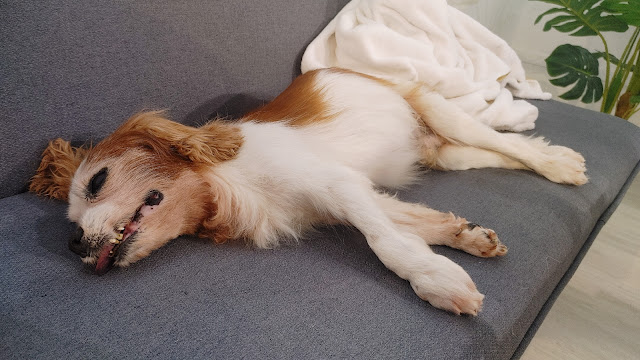 Alton passed with us by his side at about 8am on Tuesday morning, 18 May 2021. I have been bringing Alton to the office every day for the last few months cos his overnight barking would usually wake the family up, and out of courtesy to the family I just thought it's less stressful for everyone if I spend the night doing work at the office. I didn't know what happened exactly, as all his wounds have recovered very quickly, he was loud and his appetite was good. I didn't bother to do an autopsy (cos really there's no point, just let him go beautifully). I just picked him up, and held him in my arms for the longest time. 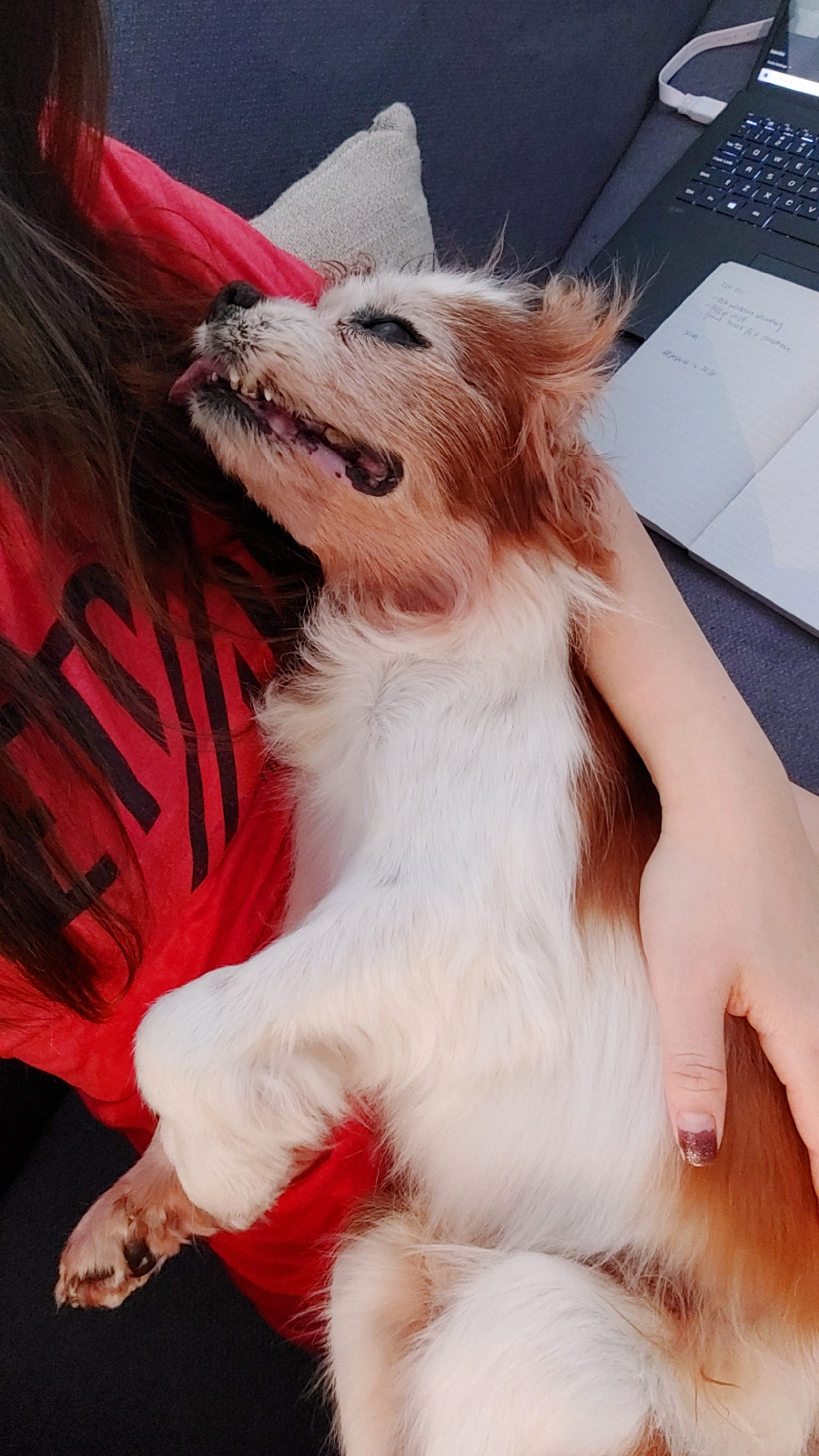 The first thing I did was to text Eze, my animal communicator. I'll share more about this in the next post. I wanted to know if there were anything else I could do for Alton, if he wanted any of his belongings to be cremated together. (Some pets do, but Alton didn't want anything.) I was told Alton was already on his way to the rainbow bridge, which was good. Some dogs may hang around and not want to leave their owners, but I'm guessing Alton now can run and has great use of his legs, and it's been a long time since he could run, that he just started to make his way to where he was supposed to go. I was advised to light a candle for the next 48 hours for Alton to help him light his path to the rainbow bridge, and that I can only do a rainbow bridge connection to communicate with him about 3-4 days after his passing - first 48 hours for his transition over, and the next 1-2 days for him to get used to his non physical body at the rainbow bridge.
While waiting for Eze's reply, I proceeded to make a call to Sanctuary Pet Cremation. As Alton was very old, and even though pretty healthy, I had previously done my homework. I didn't want no surprises, and I didn't want his sending off to be an anyhow affair. After all, he is family. The reviews have been good, and reassuring. Melvin from Sanctuary picked up my call, and gave me a few options for the time slots, as well as an option to pick Alton's body up. I was also informed of the price upfront, and it was really reasonable. There were 2 same day slots in the evening, but I really wanted to bring Alton back home, clean him up nicely and have him spend one final night at home in his own bed. So I asked if I could take the next day slot, and if there's anything I need to take note of. I was advised to keep him in an aircon environment to preserve the body better, and to just wipe him down with wet wipes. And if I felt uncomfortable at any time at night, they could come pick him up. Melvin also asked me to send him a photo of Alton, so they could prepare his portrait photo.
I brought him home, and let everyone have an opportunity to hold him, before bringing him to shower. Yes, I showered him, instead of just wiping him down. He had dried up saliva all over one side of his face, and he was a little scruffy. I washed him with his shampoo, like how I would have done always, carefully avoiding water in his mouth and nose. I washed his ears, his paws, his underbelly, his face...
I then blow dried him and ensured he was fully dry, before giving him a final paw groom and a little haircut and fur brushing so he's neat and handsome to go. 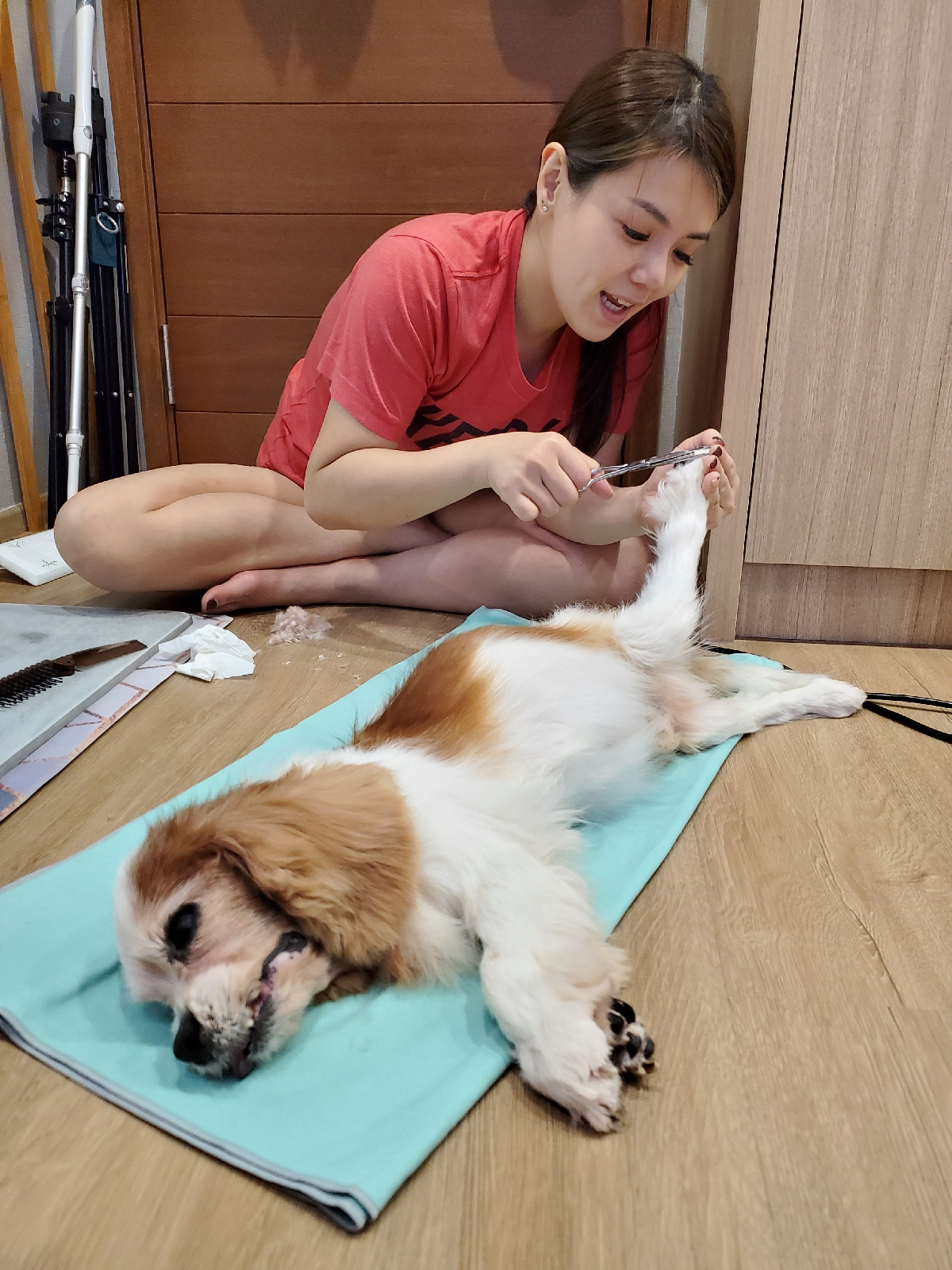 I also had to make sure I standby tissue, as there was no more bladder and bowel control, so I would place some tissue around those orifices in case he leaked. I had a scented candle on for him that night, and he slept in his own bed, at the foot of my bed, for the very last time. 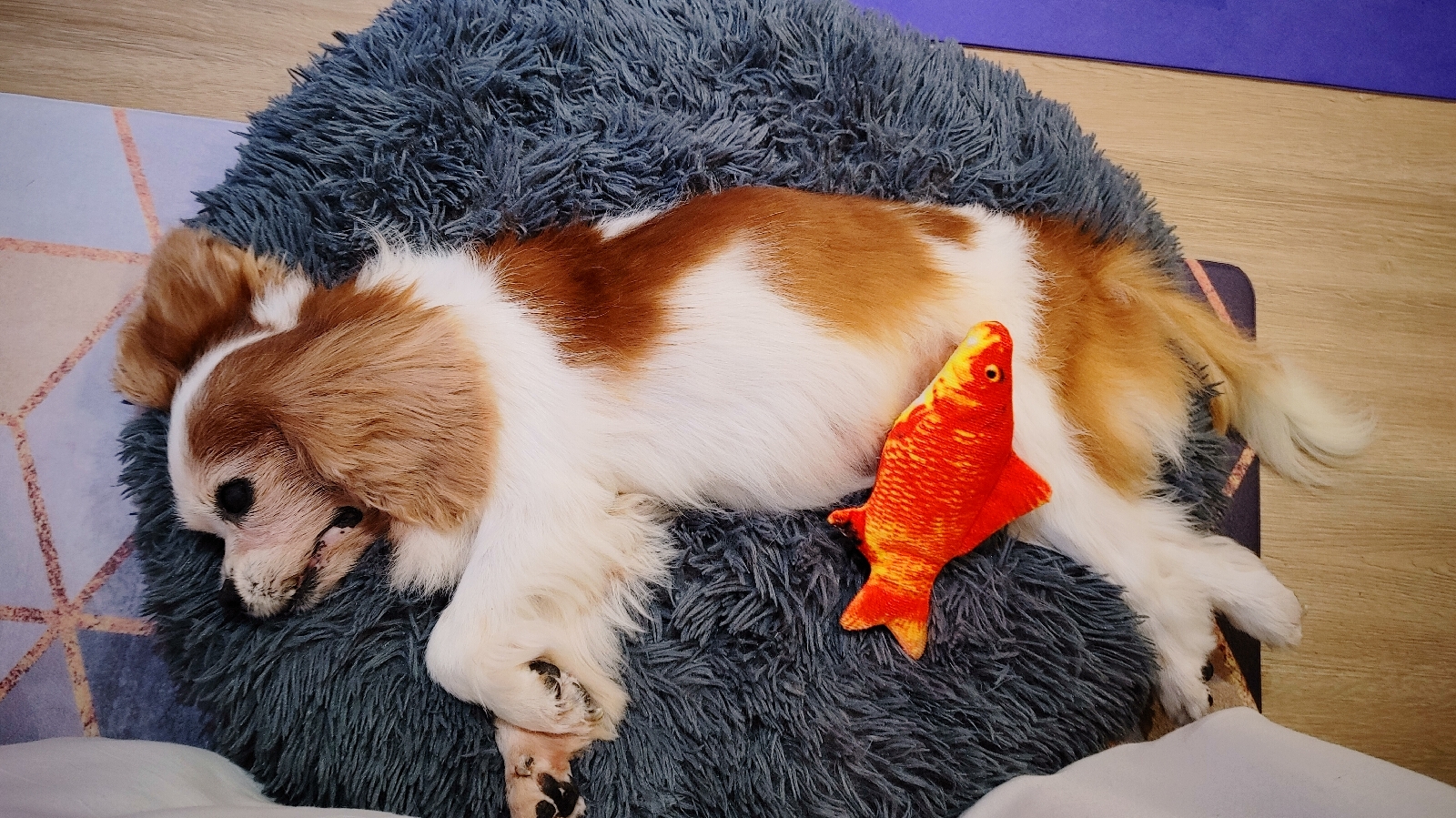 The next day, when we reached Sanctuary, I was pleasantly surprised to see that it was actually within the old D'Kranji Farm Resorts (now Gallop Stables), at the side. Alton had stayed there on one of our staycations at the villa before! And my mum used to go to De Beer Garden there, and I would bring Alton to go run around. So it was in a way, an old familiar place for me and my furboy. 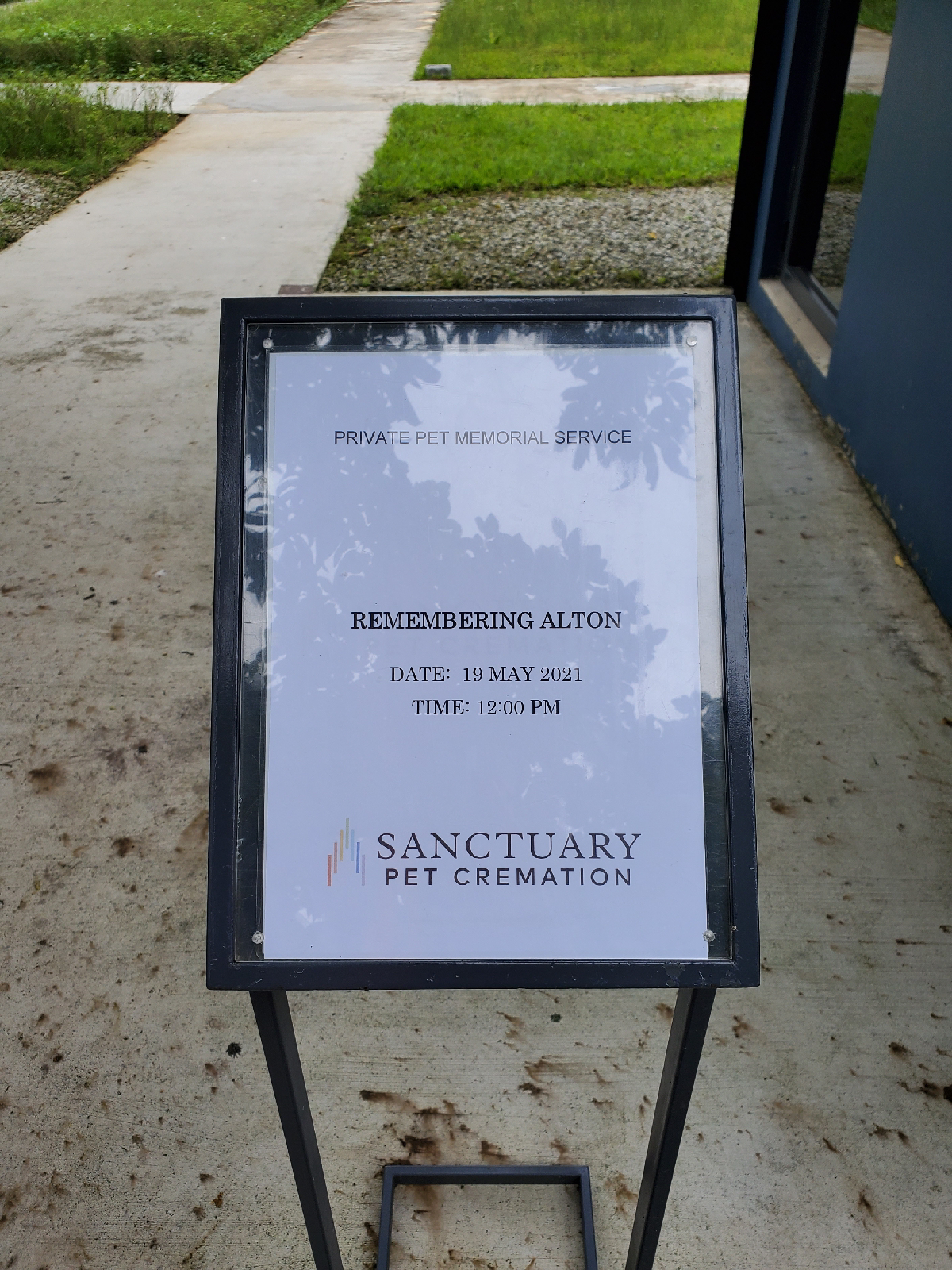 There was a sign for Alton ready for us to have a private session. 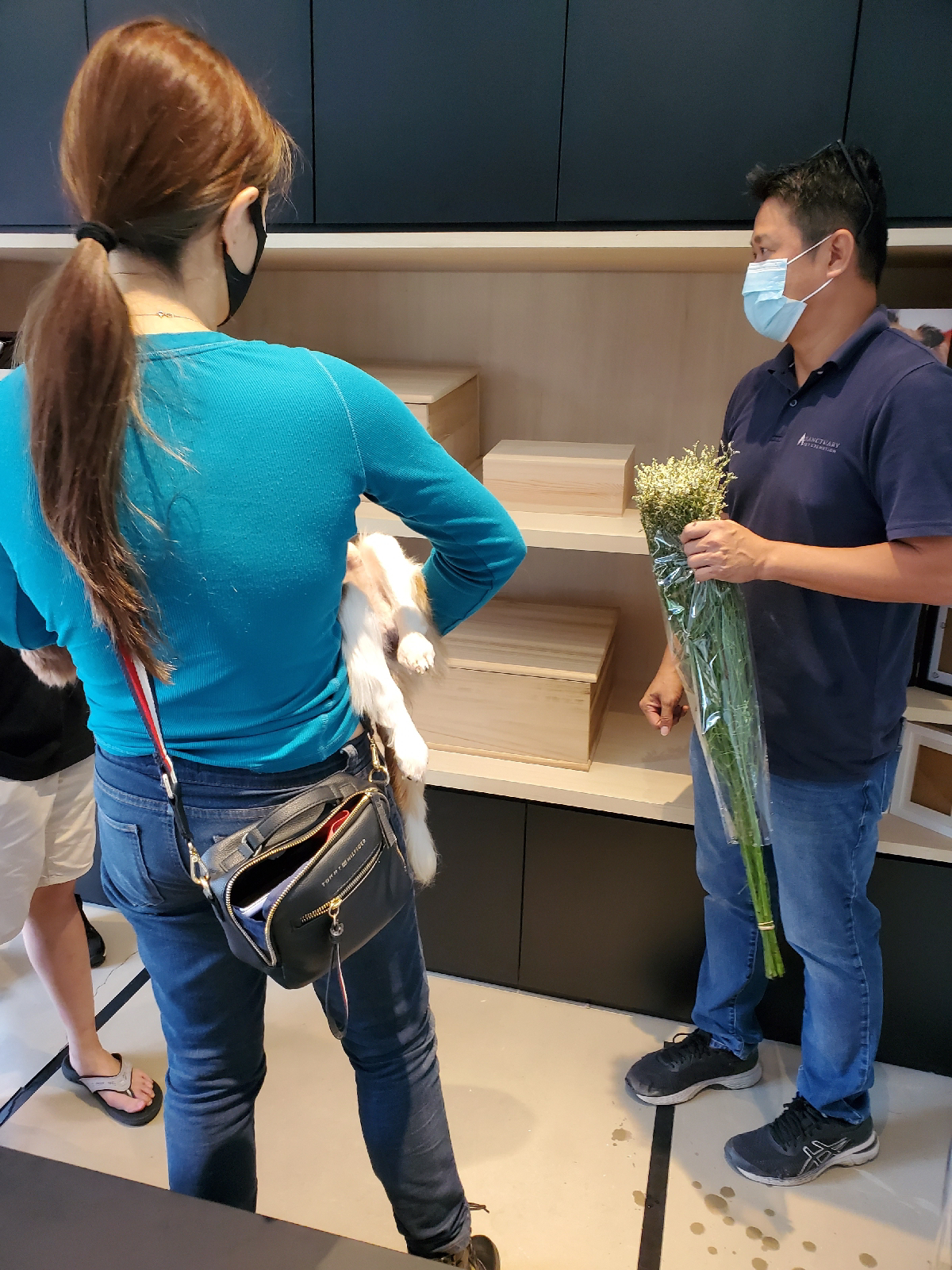 At the reception area, we could pick out a bouquet for Alton. Buy additional ones of your own before heading there if u want a luscious floral bed and with flowers of your choice for your furkid's send off, as the flowers provided have only 3 options. At the reception area you can also select some keepsake options like paw imprints, or a pendant to keep a bit of his fur with us, at a small cost. I went with the pawprints. (Had already kept some of his fur earlier on at home.) We could also choose whether we wanted a dog coffin, or just go with the board that was provided. I kinda regretted not bringing his bed along so he could lie comfortably, since I won't be keeping his bed, but I guess that was fine. We didn't go with the coffin as we wanted to go with a more environmentally option and didn't want to waste wood. 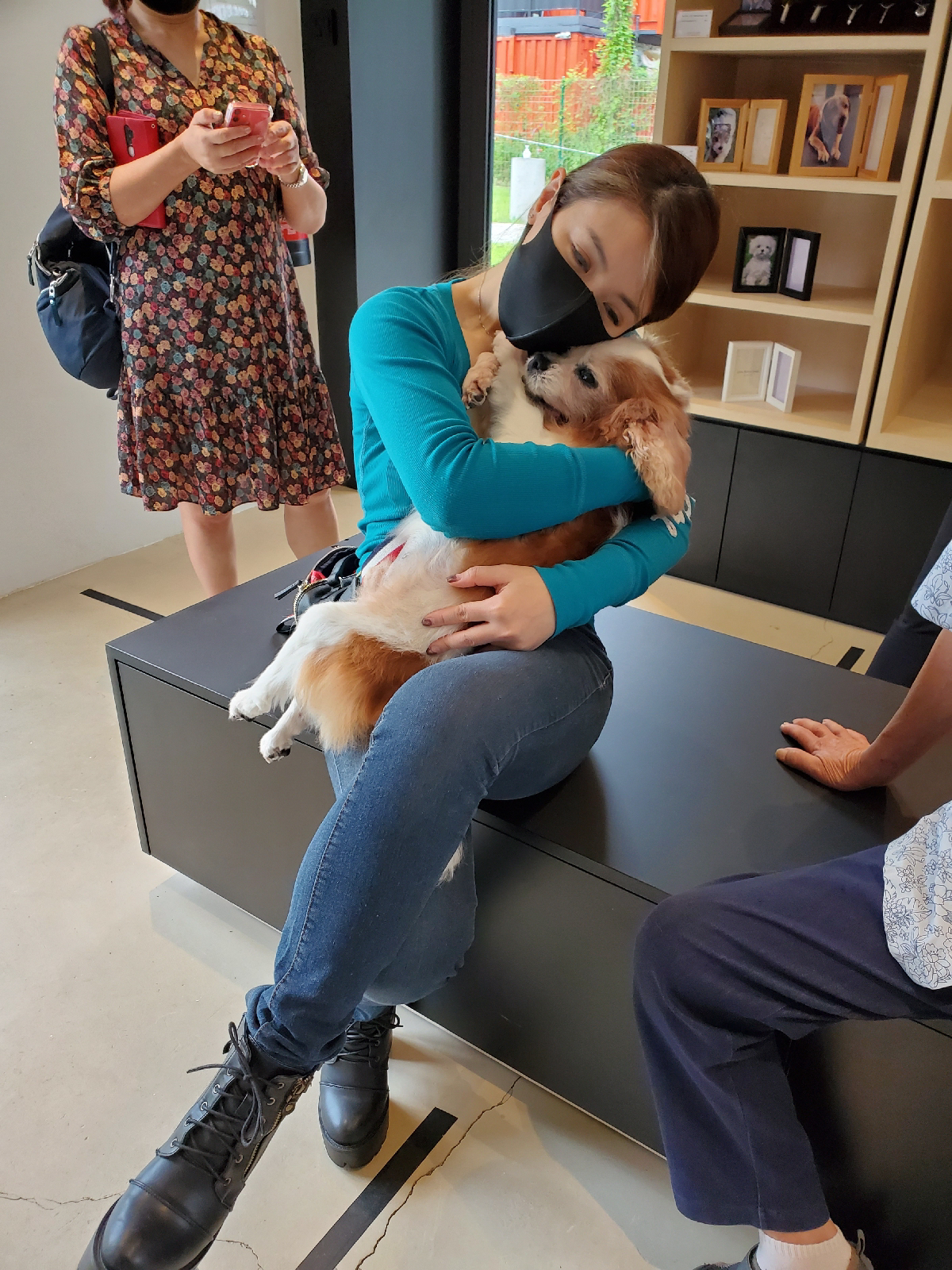 When all the selection was done, we were brought over to the private hall where we would spend the next 30-45min with Alton before the cremation. Here we were given the opportunity and privacy to prepare his flower bed, write him a letter, drawings, and bid our final goodbyes. The whole environment was very serene, with soft music in the background, and parrots next door (there's a parrot farm next door.) Tissues and wet wipes are provided, in case, you know, you need to either clean yourself up from too much cryng, or clean your pet up in case of accidental leaks. The bed was placed right in front of the kiln, which was decorated in a way that symbolized the rainbow bridge, which I thought was a tasteful and nice touch. 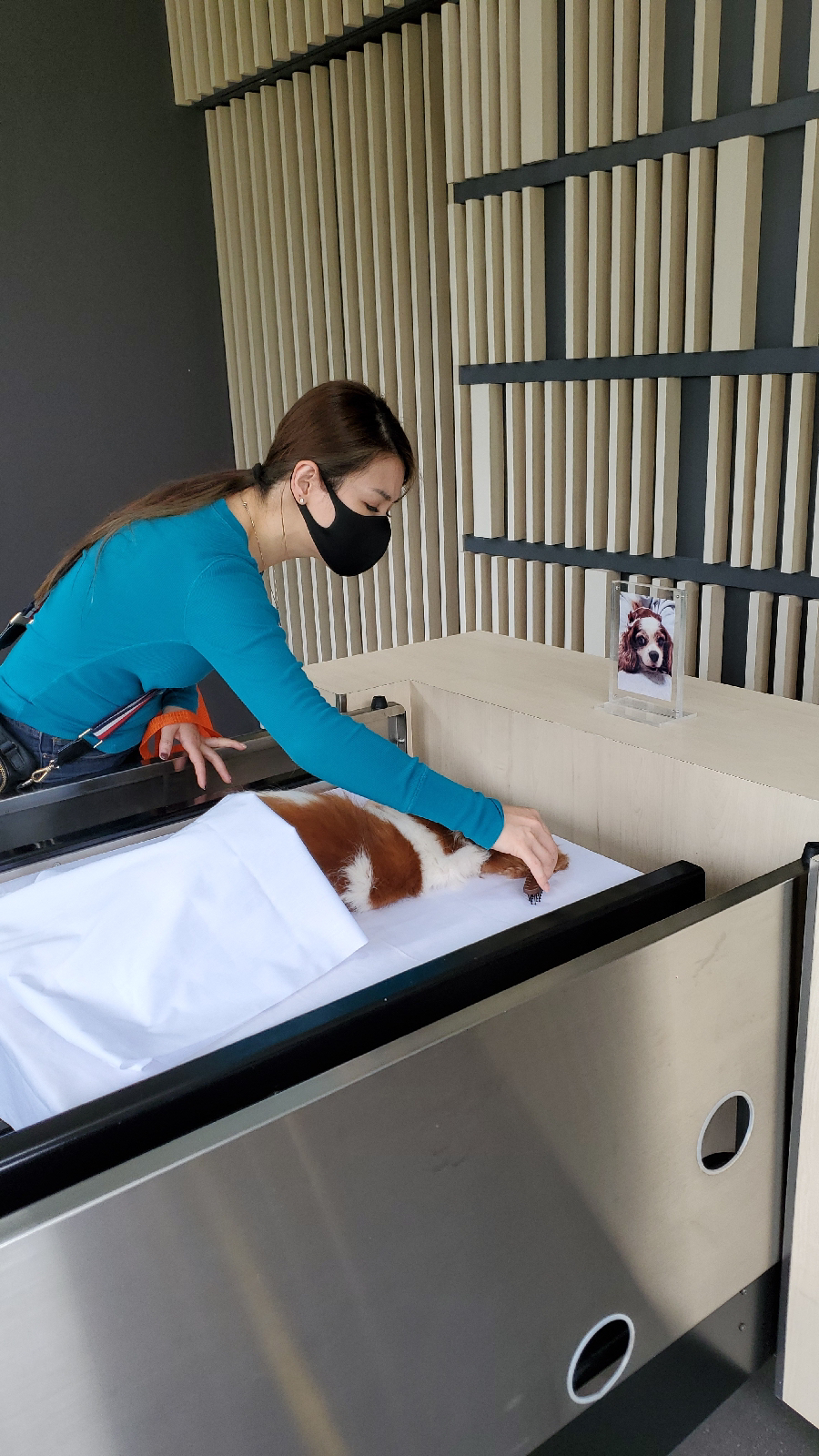 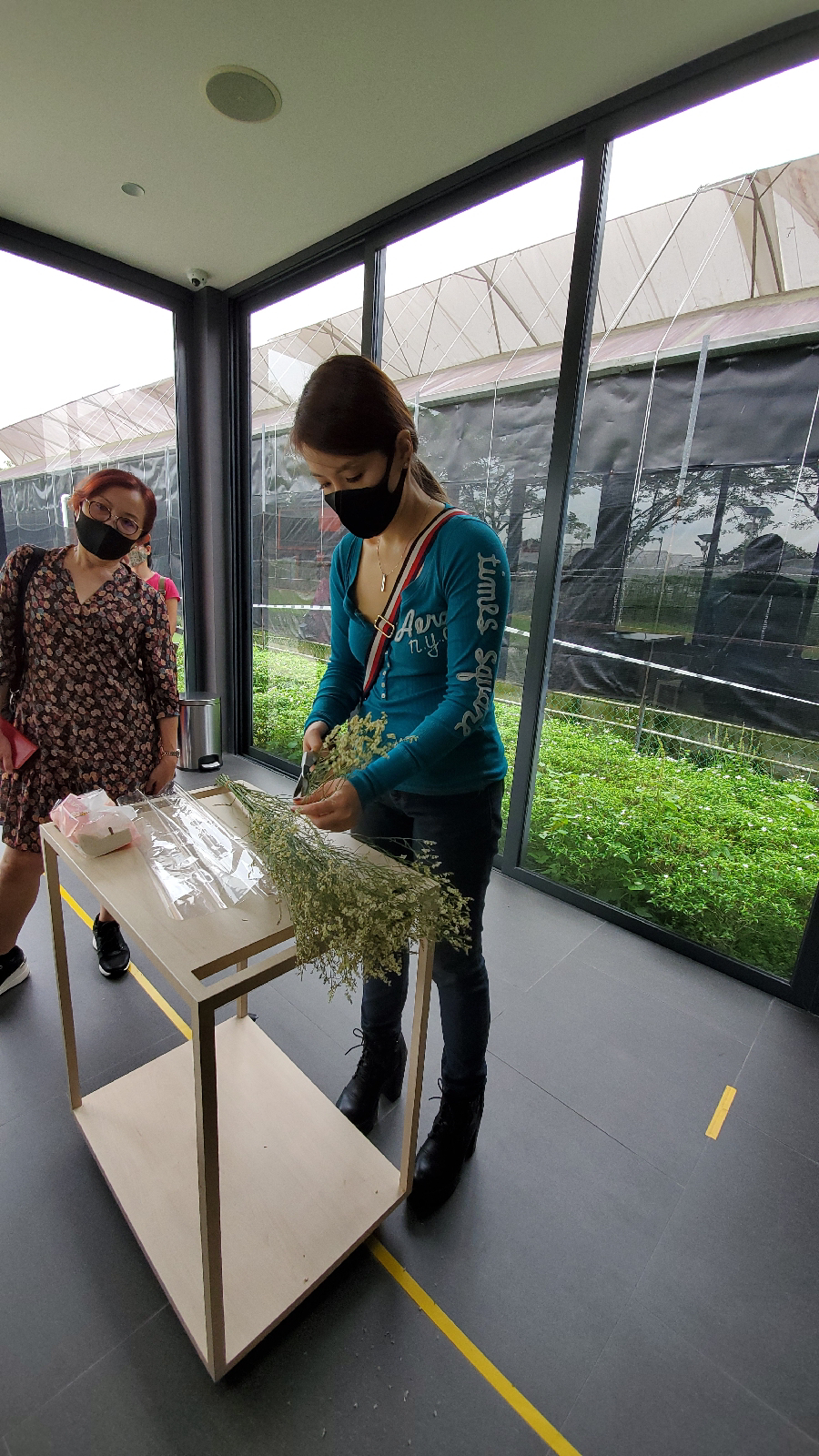 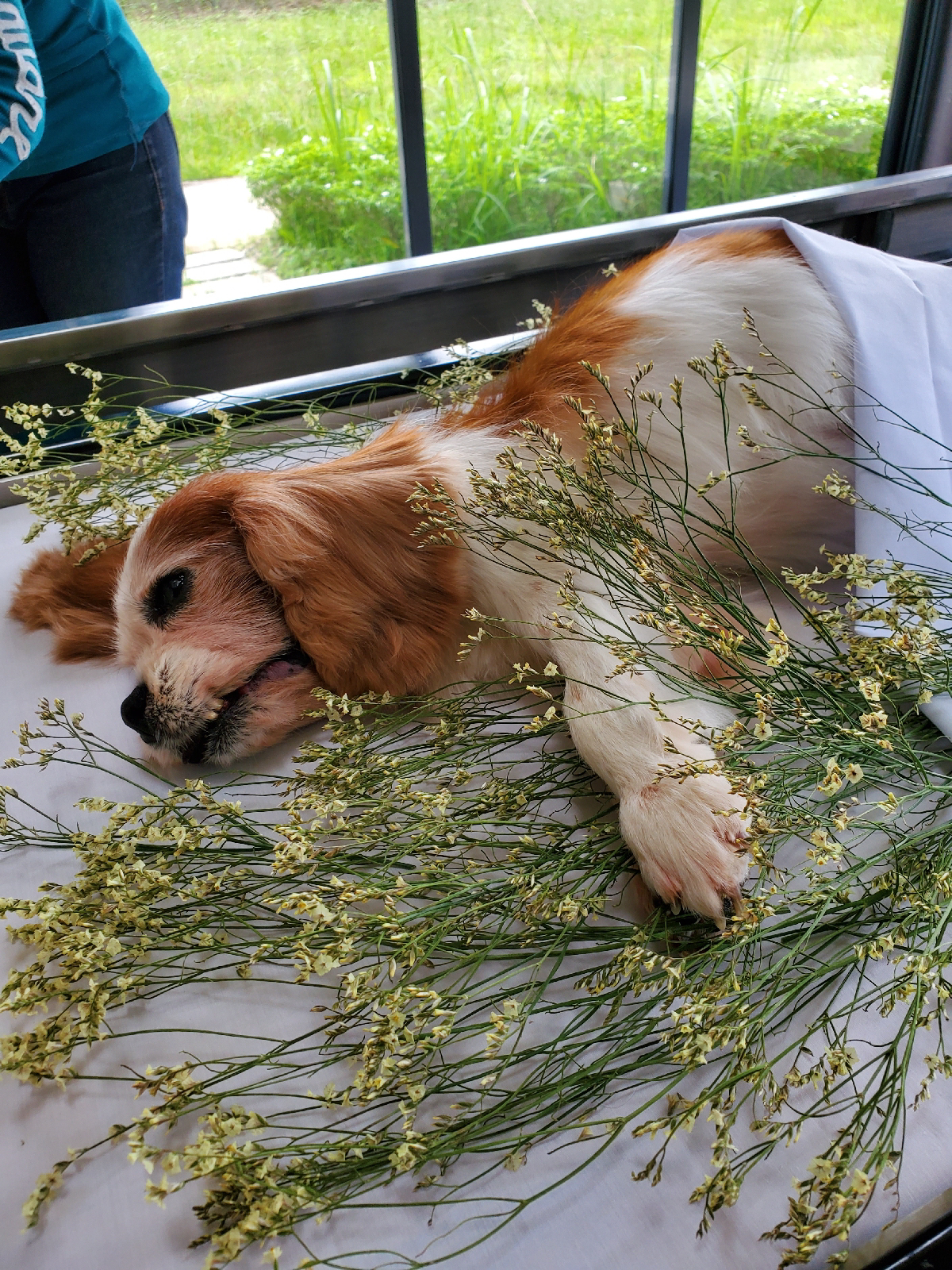 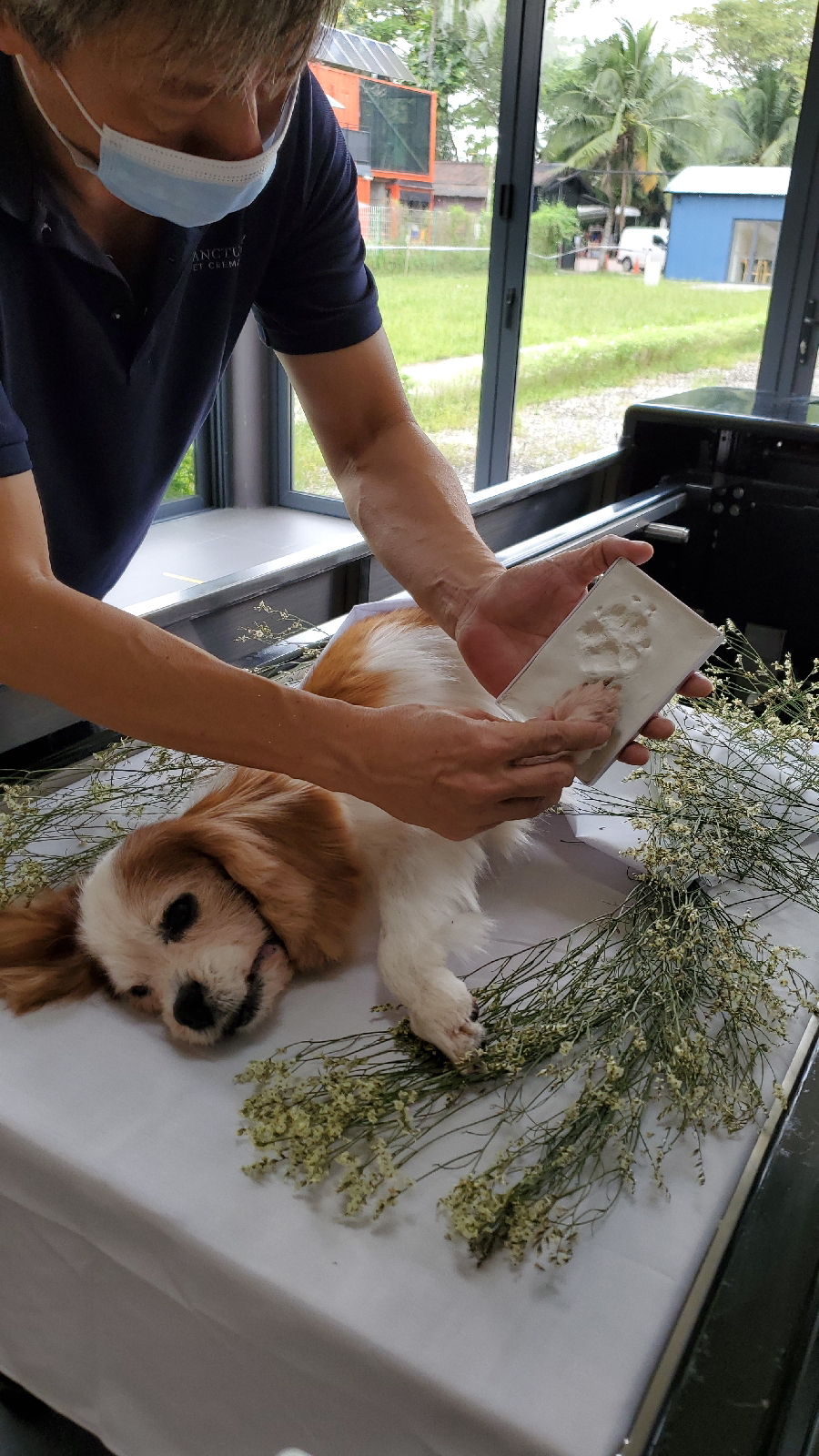 Melvin came in and carefully took Alton's paw prints, and was out to leave us with our private moments. 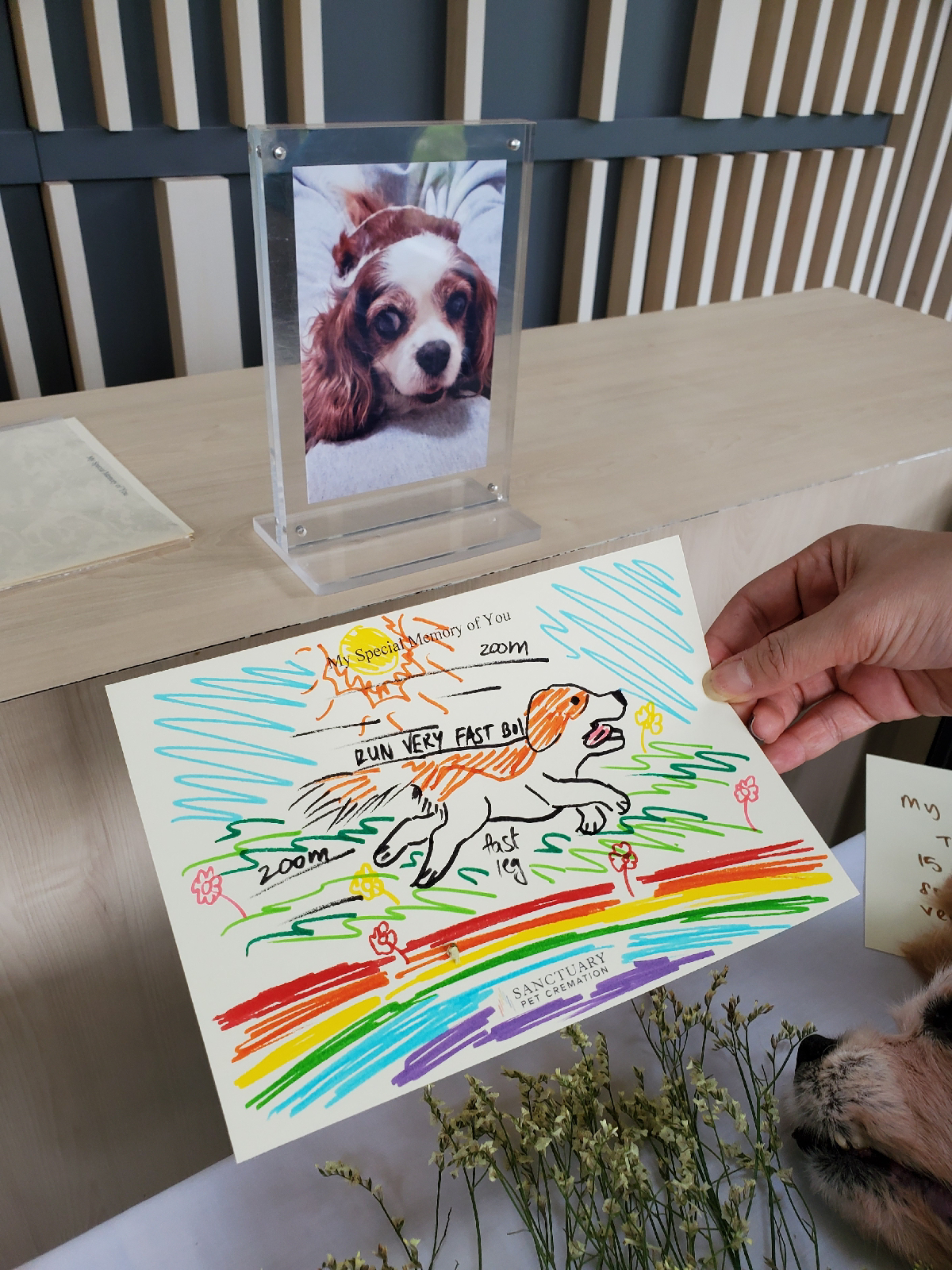 My sister drew the best depiction of Alton in his prime - a very crazy fast running zoomy dog who's always so happy and full of life. Yes that's how I remember this boy, before the challenges of old age took over. 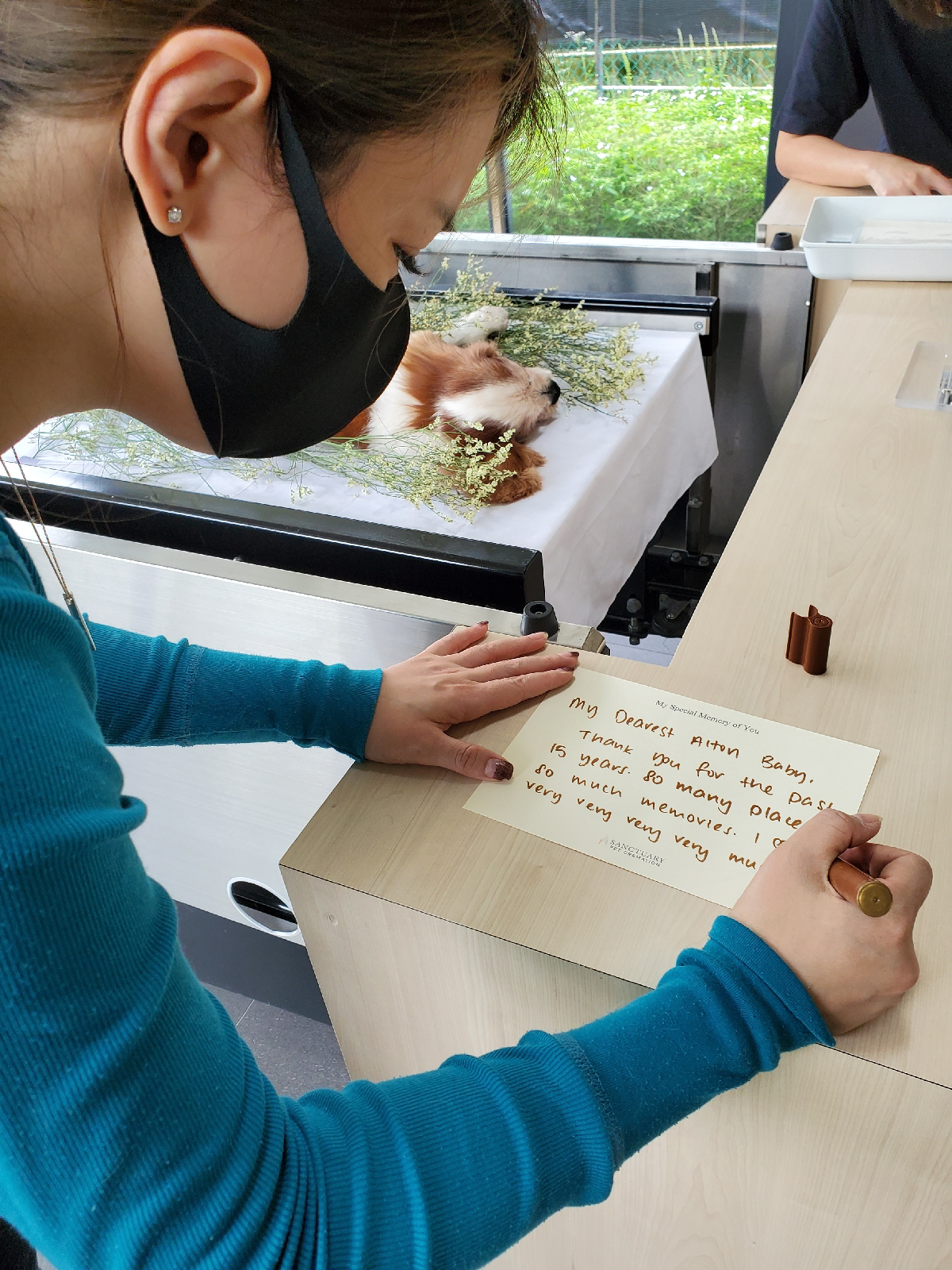 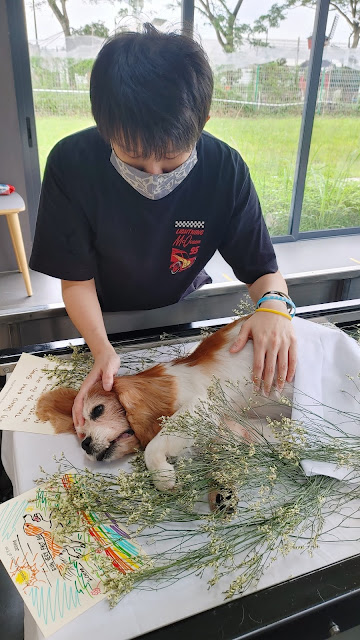 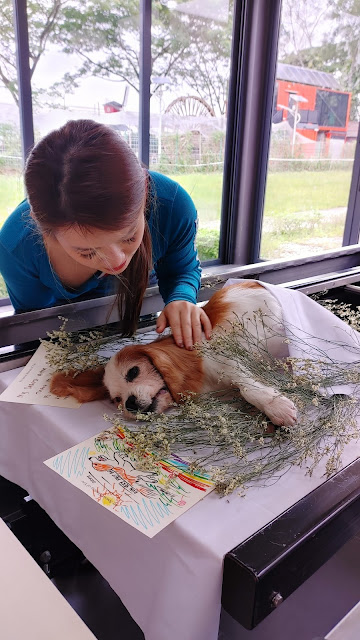 When we were ready (or when it was time - I think one can never be ready for these things), Melvin came in and briefed us on how the cremation will be done. Then he opened up the door to the kiln, and slowly pushed Alton in. 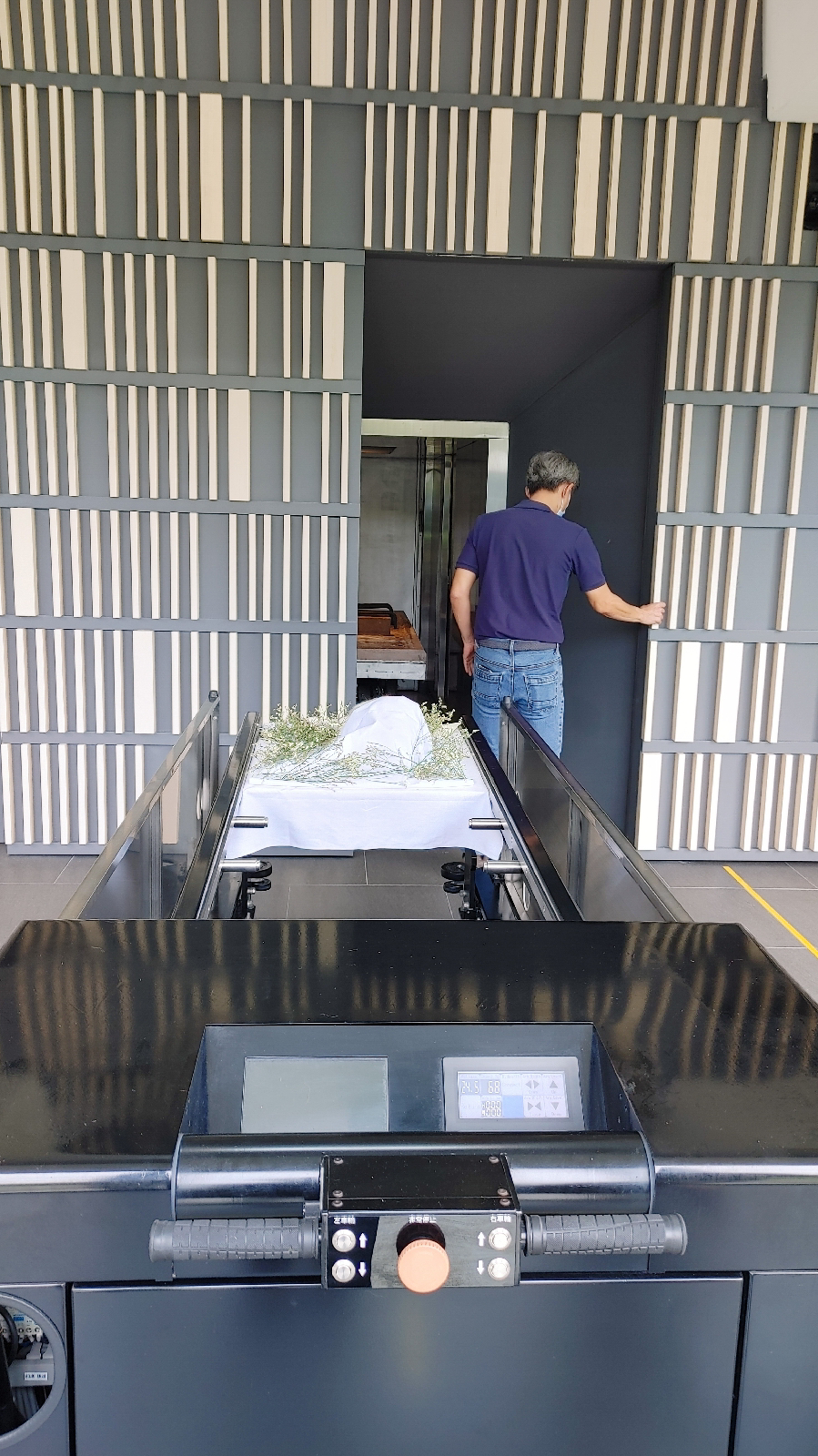 I was to be the one to personally push the button to close the door and start the cremation process, when I was ready. It was a symbolic touch I thought - I brought him home, and it was only right that I be the one who sends him off on his way too. I stood there for a bit, thanking him for all the years of love and happiness, and pressed the button. I stood in front of the door, and we waved our goodbyes and urged him to go, just like how I would when I sent him to his pet boarding holidays, or to doggy day care. He would always look back and bark. So I imagined he would do the same, and I urged him to keep going as the doors closed. It was the strangest feeling ever, but I know I'd rather be the one doing it, to be there for him till the very very end.
After that, we were brought to another room where we were served tea while we wait for the ashes to be ready. The process would take about 1 hour. Here we could select the urn for his ashes, as well as any pendants if we wanted to keep a part of your furkid with you. There were some really nice urns that looked very un-urn-like, so you definitely have some choices here. I picked out a couple, and I decided to let Alton's ashes decide which ones to go with. If they were all crumbly, then I'll go with the smaller one. I personally liked the bigger one (cos it was more classy looking) and it didn't have a smaller design available.
1 hour later, Melvin presented Alton on a nice tray lined with a cloth. Many parts were pretty intact, and Melvin was very patient in showing and explaining to us which ones were what. His skull, femur bones, toes, pelvic bones, jaw... It was undeniable Alton. 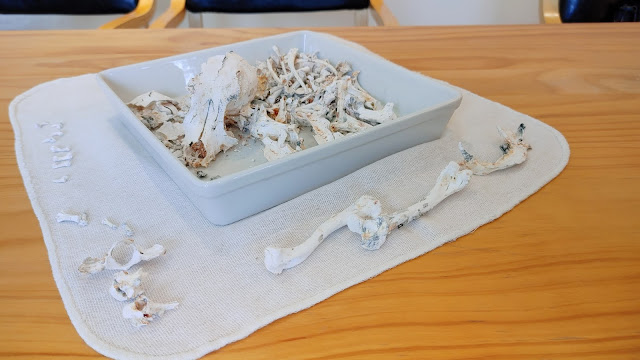 And I guess he kinda chose the big urn I originally liked (but wondered if it might be too big). Cos I wasn't going to crush his skull to fit thru the opening into a smaller one. I knew I would be living in a landed house, and I knew I wanted Alton to be there. So the bigger urn was perfect, and I also chose a pendant that could double up as a key ring, so when I got my keys to that house, Alton would guard those keys. He would have liked running around in a big house with a nice garden! 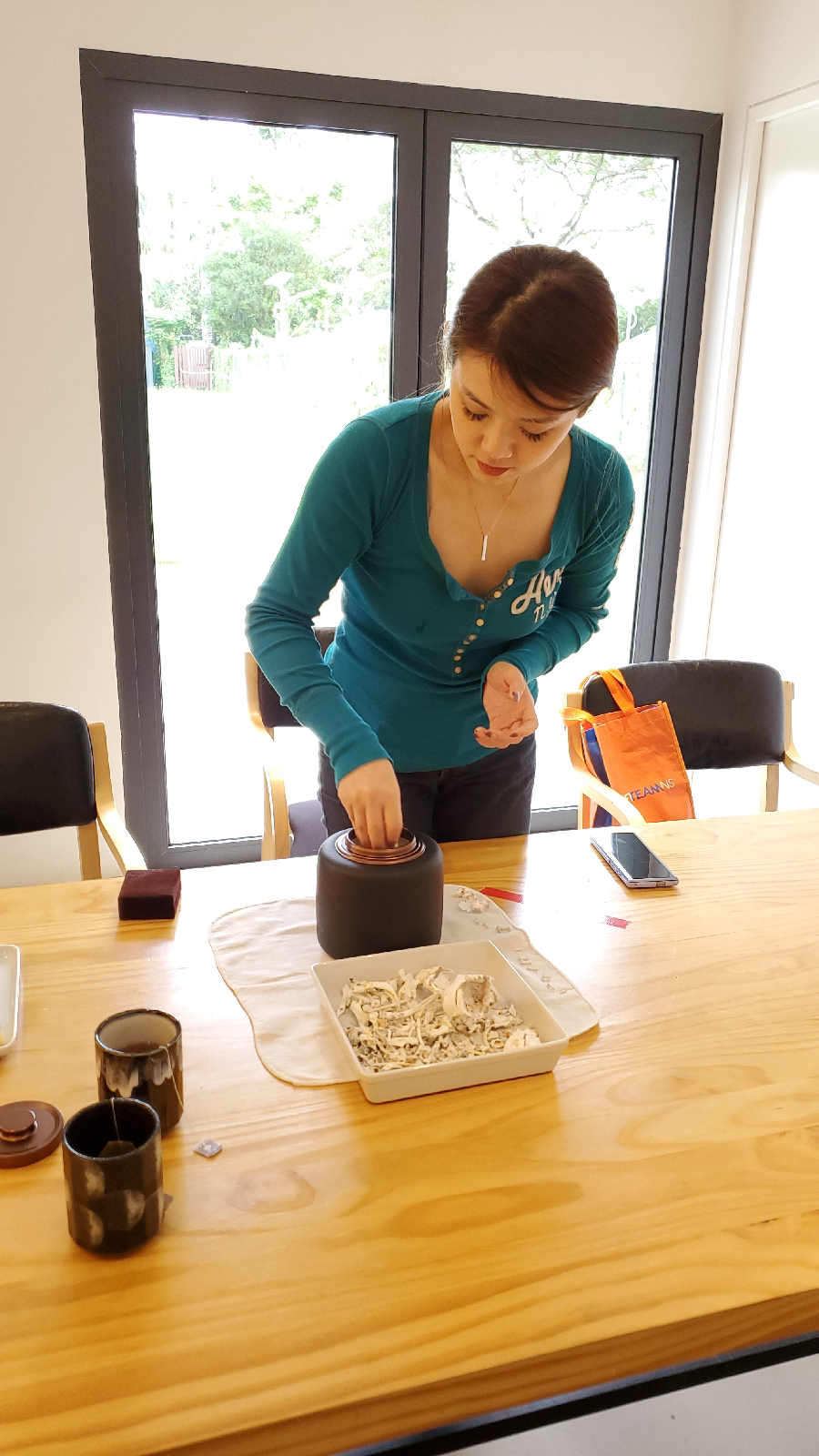 We were advised on how to put the ashes into the urn on our own, and Melvin helped us with the small small powdery fragments with a small brush. He packed the urn nicely for us so it wouldn't spill on our way home. 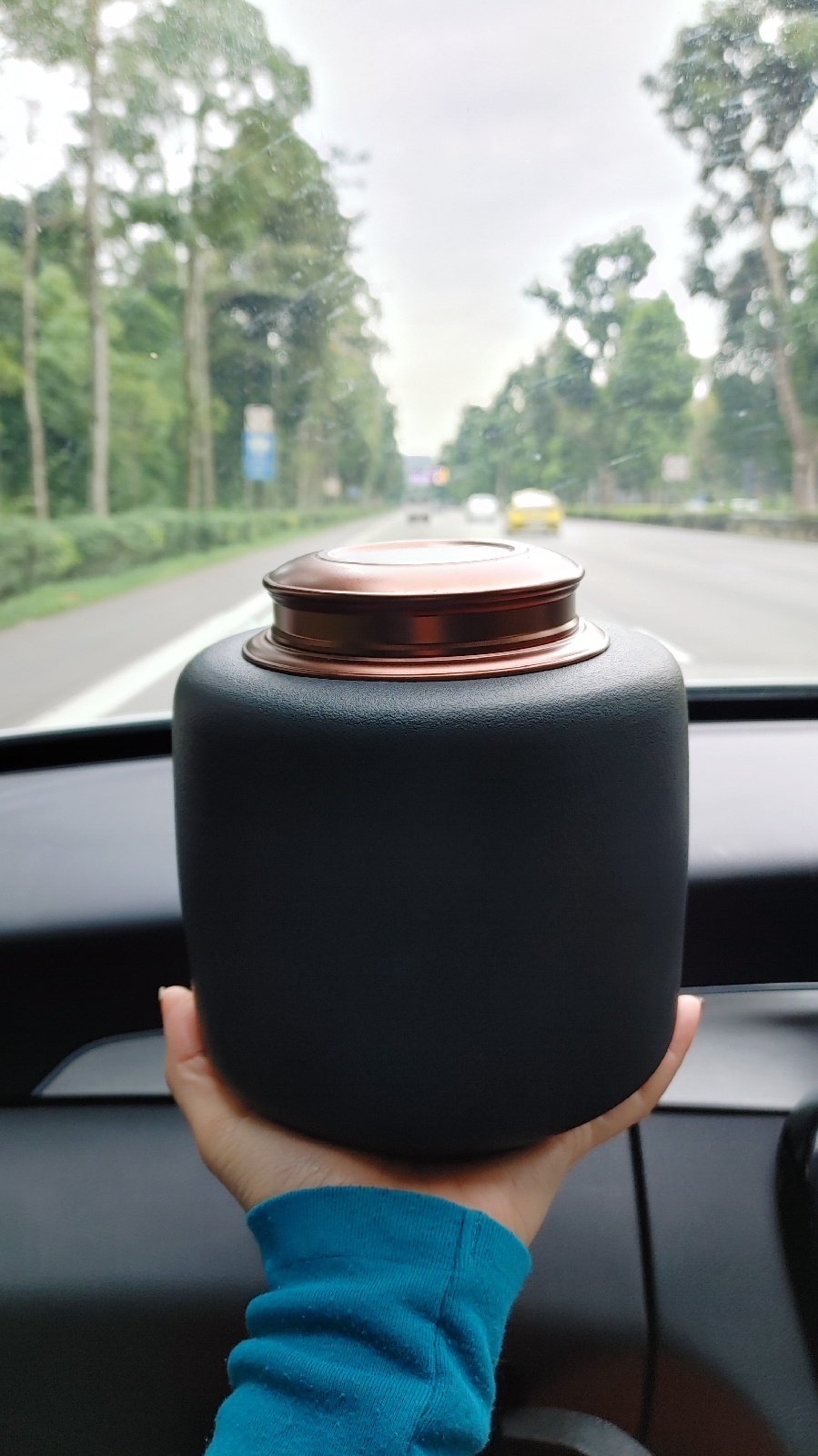 I'd say I picked one of the pricier urns, as well as some of the nicer keepsake choices (a photo frame with Alton's paw prints, and a locket pendant for his ashes), and the total only came up to be about 600+ sgd. I thought it was really reasonable. The price stated for the a service for a dog of Alton's weight (~6kg) was 388sgd + GST, and already includes flowers and a standard urn. I was also presented with the papers should I need to deregister Alton's dog license with AVA.
Alton was sent off in a really dignified manner, it was a private service, and everything was done properly, in a beautiful setting. Truly grateful to Melvin and his team. Hopefully me sharing  my personal experience and documenting it helps another pawrent out there, should the inevitable moment come. ❤️
Labels: Alton Dogs Prince Alton
Location: 10 Neo Tiew Lane 2, Plot B & C, Singapore 718813