My favourite Halloween event every year is back!!!

I'm serious when I say it is my favourite. I've never missed a single year since its launch in 2011, and this year shall be no exception. Each year they impress me with the set, the costumes, and the whole general effort put into making it successful. Universal Studios 就是不一样. The only thing which I think is not done well enough would have to be just the trailer for the 3 evil sisters. The normal trailer looks pretty good though.

The actual Halloween Horror Nights 3 (thereafter known as HHN3) is so much better. Of course, it would be difficult to match a video to the whole experience. You just have to go experience it yourself.
I wouldn't want to spoil your trip to USS's HHN3 this year, so I won't share TOO much. Just a few tips and insight into what I got from the media preview.

This year, there are going to be more nights spread out over the Halloween period, increased from last year's 7 nights to 10 nights this year. So hopefully that helps spread out the crowd over more nights so the USS won't be soooo packed, and the queues shorter. Hopefully.

Scare hours are going to be longer. Previous 2 years' feedback was that people didn't have enough time to complete the whole experience. So instead of 4 hours, the park will be opened from 7pm to 1am, a good 6 hours for you to be completely scared silly. ;)

One tip: Go at 7pm. Better still, be there by 6:45pm. So you can still have time to wait for your friends who might be late, take pictures at the entrance, find parking, yada yada. 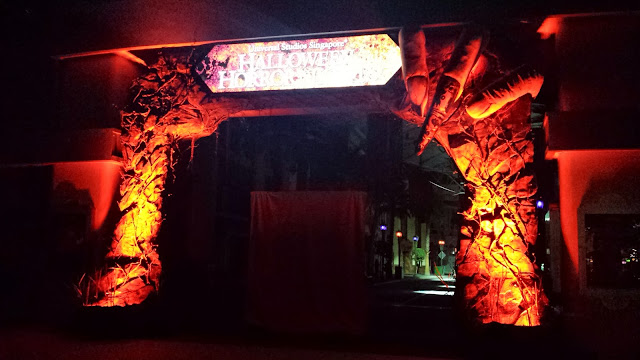 They made amendments to the entrance which used to be a scare zone. This year the entrance is kept clear so people are not stuck there spending too much time taking pictures and not having enough time for the actual stuff going on inside.

If you worry that going too early is going to spoil the whole scary experience, fret not. The haunted houses are all indoors this time, so there's no more outdoor haunted house. Which also means you feel less safe. Lol. Be spooked. ;)

Of course, for those who are really easily scared, there is a safe zone at Sci-fi city where you can take a break from the ghosts and scary shits happening elsewhere in USS. And maybe go ride the Mummy.


Here comes the real intro. There are 3 iconic characters developed - The 3 sisters of evil. See if you spot them when you're there ok? You can find out more info about them at the HNN3 Official Site. Like I warned, the 3 sisters' trailers weren't too good. But not to worry because the rest of HNN3 is superb. =)

There will be 3 scare zones and 3 haunted houses - we'll start off with what you will see when you follow the normal route:

As you turn right from the main entrance, you will see the Monster Rock show. I would recommend you not miss one as there is a special Halloween edition different from the usual one if you've already seen that. But because show times are only at 8pm, 10pm, and 12midnight, you might want to watch the midnight one as you exit. That is of course, if you come at 7pm and finish all the attractions on time. 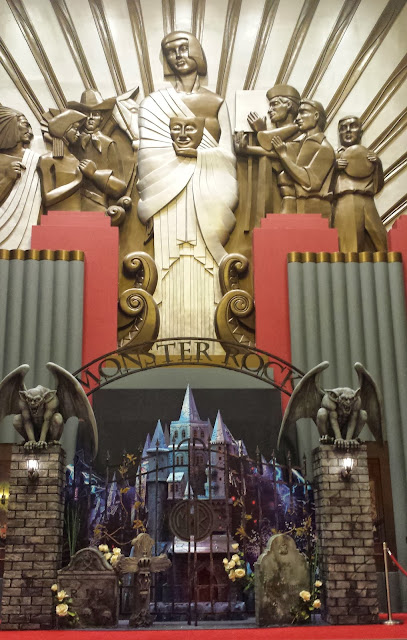 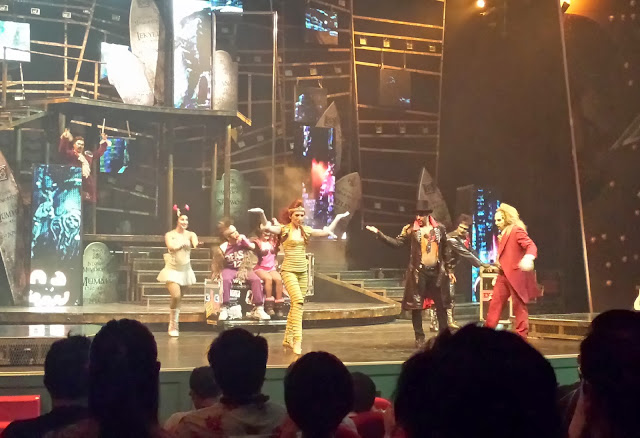 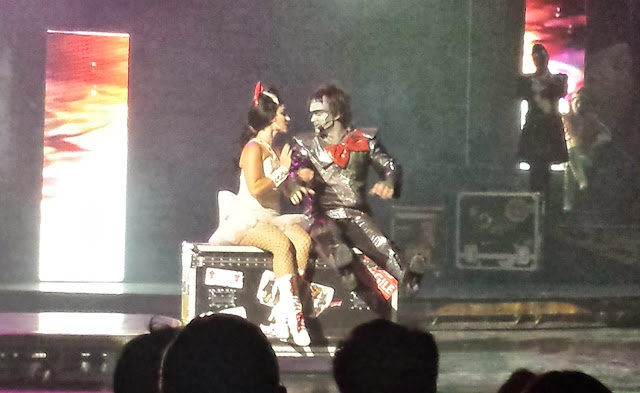 Then as you go on, you will come to the first haunted house on your right. (If you are confused, here's a map.)

Adrift
I really like this. It's basically modelled after a sunken cruise liner, and of course everyone has died in the ship. Except they don't know it. I love this one because it really feels like a ship. The floor feels like it, in the sense that when you walk, at times you will feel a little unstable and rocky, as if you are really on a ship. I have no idea how they did it, but that was really cool for me.

They made it kind of like the Titanic Artifacts exhibition, except scarier. There are the crew decks, the engine deck, the passenger deck, the room corridors, and steps between floors. One thing to note: do not run inside. Because there are steps (duh), you will fall. Will. If you run. Confirm.

Unfortunately, because it was so dark right, I didn't manage to take any good pictures.
But then that means you don't know what to expect. Heh~ Enjoy this one.

Next you will come to the main street, which is the first scare zone: Attack of the Vampires. 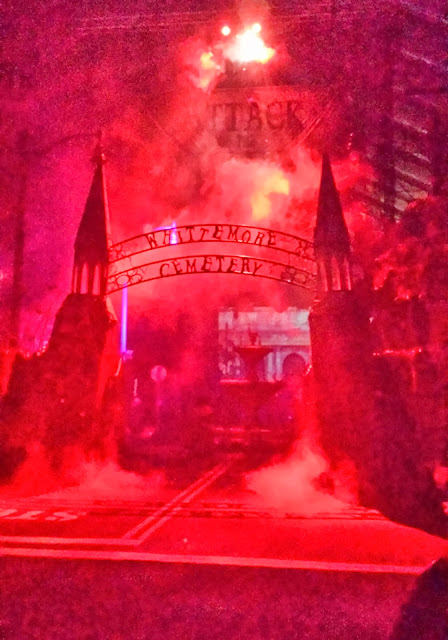 Like the name suggests, this scare zone is all about vampires. I call them the ang mor ghosts. Lol. 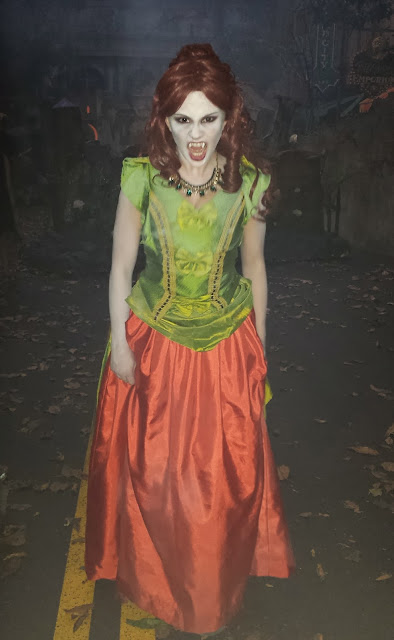 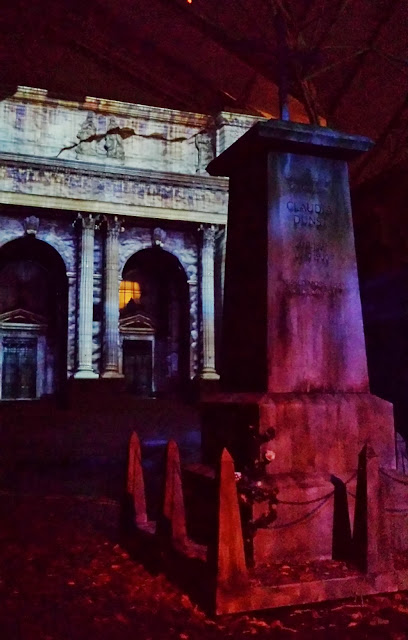 This is my favourite installation - the New York Library. Looks really good, don't you think?

Then you will come to Sci-fi city, which is a rest point. Unless you are really hungry and scared and tired, I do not recommend a rest at this point. Come on just walk on la! The next part not scary one. Really.

Convention of Curses
I find this part really cute. It's the Egyptian street where the Mummy ride is. This part is where it's like a flea market of witches and other-realm beings selling curses. How scary is that right? =) 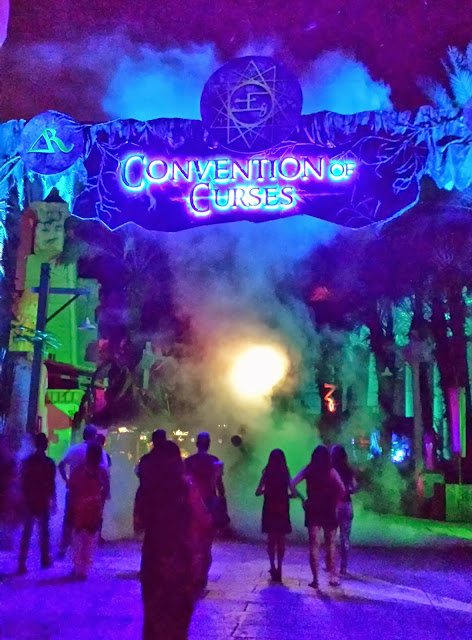 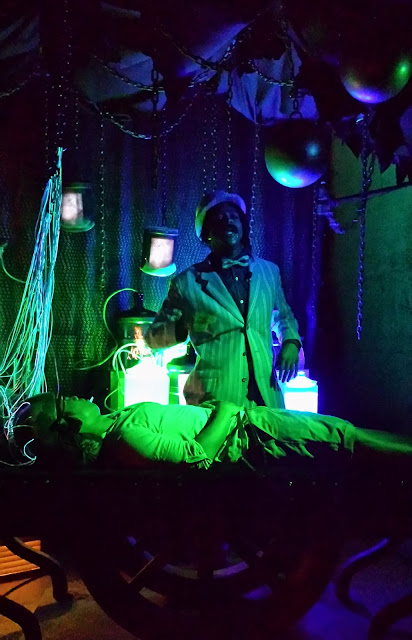 Remember I mentioned a levitation act? ;) 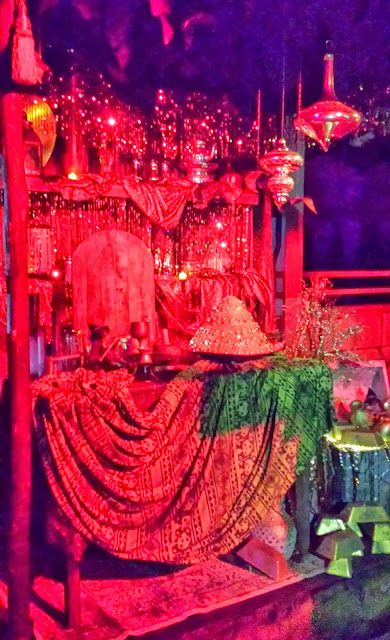 If you are lucky and in time, you might be able to catch the dark arts practitioners dancing. They have special dance performances at regular intervals throughout each night. =)

After the Convention you will then come to Songs of Death, the Chinese Opera Academy haunted house. This is by far my favourite. 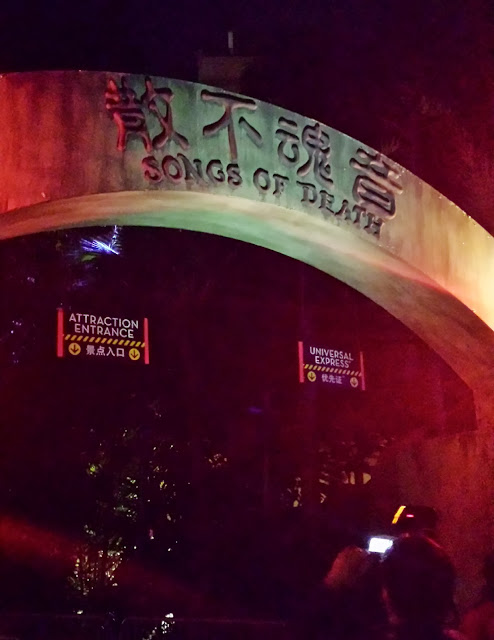 Yes there is a Universal Express pass for those of you worried about the long queues. The queue is going to be considerably shorter if you get that. Otherwise I recommend going with someone you can really chit chat a thousand and one topics with, or go with a group of fun friends. So it's more fun when you're queuing. =) 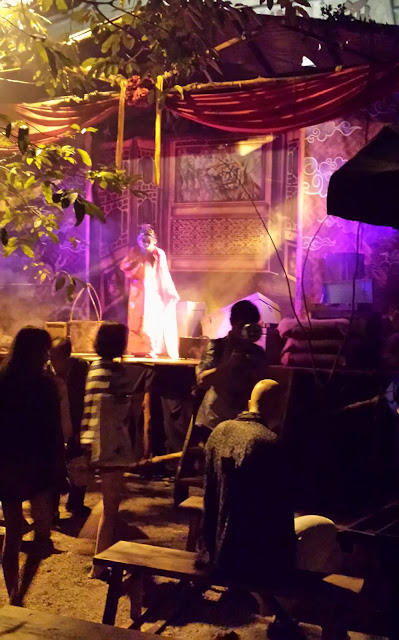 Really really like what they have done to the place. The set looked really amazing. 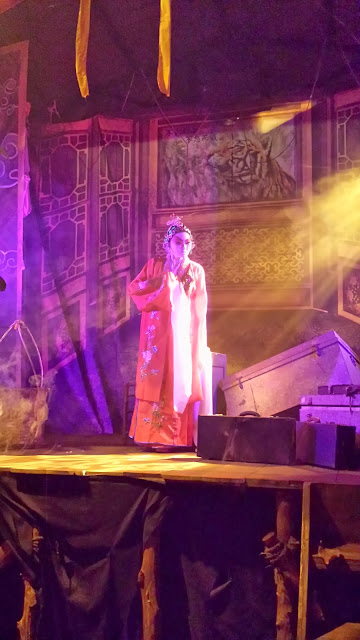 This, I feel, was the scariest house out of the 3. I felt that the twists and turns in the house were never going to end and I was never going to come out. Cos it felt very long. And there were really scary elements like the ancestral tablets and joss papers and incense sticks around. And opera costumes *hint*. Especially if you are from a traditional Chinese family, this house will give you the spooks.

After you're done with this house you will enter the Forbidden Forest. 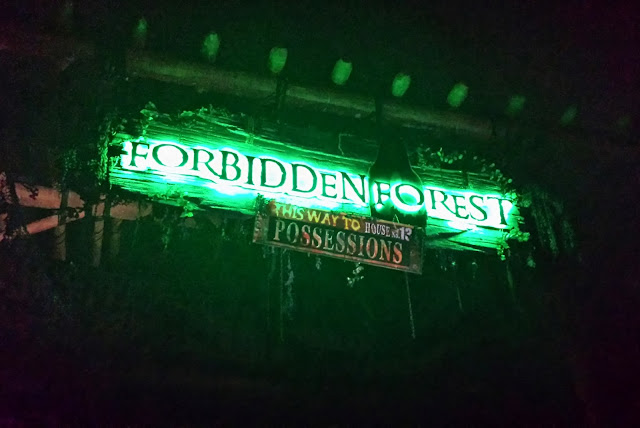 Those who have lived in the kampong might find this scary, as it has all the usual forest ghosts or ghosts which linger around trees. Like the Pocongs (jumping around wrapped in white cloth) and the Pontianak. 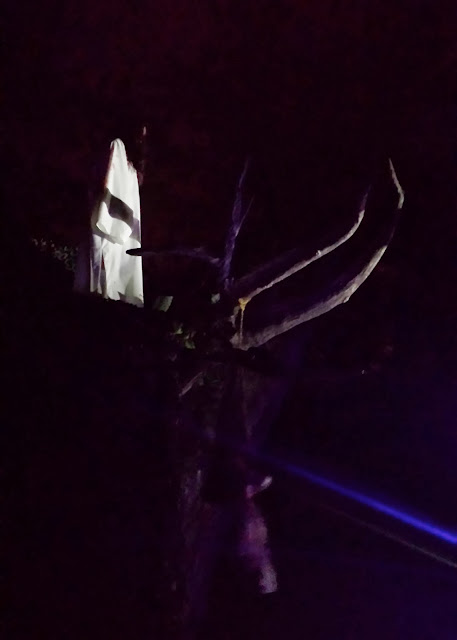 To get to the last haunted house you will have to walk through the Forbidden Forest. There will be arrows leading you to the house, but let me warn you, you might walk in circles and feel like you can't get out of the forest. Because these arrows change directions periodically. To keep you within the forest...
Good luck getting out! ^^
And you will finally get to the last attraction - House No 13: Possessions. This is essentially a haunted house for sale. Think Conjuring. Or Insidious 2. Or something like that. Basically a possessed house.&nbsp;

So there you have it. A rough guide into the Halloween Horror Nights at Universal Studios Singapore this year. A few things to note:

Get the Express pass if you really hate queuing. I'm recommend finding a good conversationalist to go with, or someone you can really really talk to, or your significant other, or an old friend you haven't seen in donkey aeon years, and catch up over queuing. I assure you by the time you are done with the night, you would have caught up quite a bit on each others' lives. Confirm plus chop.

If you really want to try your luck beating the queues, do the last house first and do the unusual route. The flow might not be as good. But you can try. Then again, other people might have thought of it too. So good luck with that. And pray not too many people have read this. Lol.

Halloween Horror Nights 3 happens at Universal Studios Singapore on the following nights from 7pm to 1am:

You can get your tickets here at their official site, or you can go to any of the box office counters at the following locations:

Students, you can flash your student passes to get discounted OPEN-TICKET (meaning you can go on ANY DATE!!!!) tickets at $50 each, and only at the above box office counters. That's a steal. Normal tickets are priced at $68 each.

Have a good time, and scream!

P.S. If you really can't decide which one to go for out of so many, I strongly recommend this one. Because everything was done so well. Actors, props, set, the whole experience. 2 thumbs up! 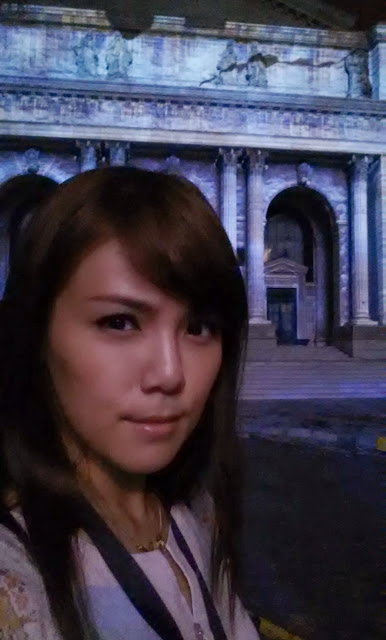