Skip to main content
Labels
Posted by Silver May 03, 2013

My phone didn't shatter completely. It was just the screen. And after having used an iPhone for quite a few years now (I joined the apple family pretty late, but still, it has been 3-4 years?), I am proud to say I have never shattered my iPhone screen before.

I was crossing the road (it was late, around 11ish) trying to take my car key out of my bag, with the same hand that was holding my phone, which I was using to text someone halfway. Like an accident waiting to happen, right?

So the phone accidentally knocked into my bag strap, and landed smack face down. On the road. U know the black tar road with all the gravel and uneven surface that we dread falling knee down onto when we were kids? THAT KINDA ROAD!!!

At this moment I was still hopeful, as my phone had done that before, yes fall face down piak on the road, and always survived with just a few scratches, or a chip off at the side. I picked it up, turned it around, and.....

Sorry for the dramatic effect. That was how I really felt though. Like I didn't know my heart hurt more or do I feel for the phone more, u know, as if I was the phone and someone shattered me? An inanimate object? *coughs* Yah I'm sometimes visually imaginative like that.

Anyway, it shattered. Bad. The screen, that is. And the only thing holding the whole screen together was my screen protector.

What was most frustrating? I had wanted to buy a flip phone cover the day before but I didn't see one I like, and I went home, took out my old flip cover that Mint's sister (Joey) bought for me, but I left it on the table before I went out that day. -.-" It's fated to happen I tell you, so that I can post this up and help thousands of you who might need to read this.

Anyway, I could still type (thankfully), so I sent a whatsapp msg to my family group chat asking them if they know anyone. Mind you, this is a super informative group chat consisting of my immediate family members, as well as 1 aunt, 1 uncle-in-law, 6 cousins, 4 cousins-in-law + 1 uncle. All of varying age groups in various industries.

Thanks to my aunt, she knows a friend who has replaced her iPhone screen at a shop in Sim Lim for $80. Pretty decent I think. And she sent me the address. Was a year ago so she wasn't sure if the guy is still around. I'll take my chances.

So off to Sim Lim Square I went the next day after shoot. And straight to this unit: 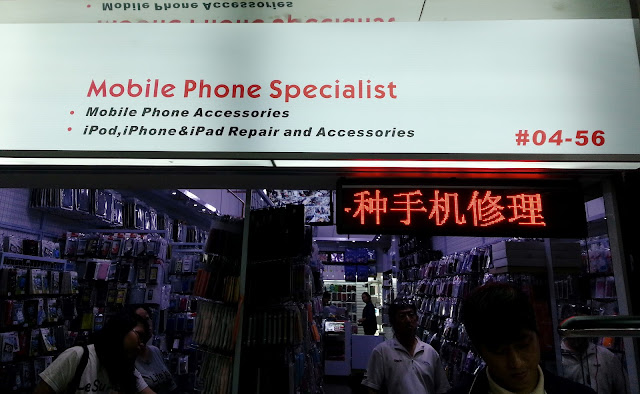 I saw a counter right at the entrance of the shop with a guy there fiddling with an iPad, an a black customer standing before him (I assumed the iPad belonged to him.) The black guy looks touristy/expaty, and to me, tourists/expats don't just go to Sim Lim Square unless they know someone reputable is there. I think I've found my guy!

He took one look at me, and I went "安可！我要给你看我的艺术品！" ("Uncle! I want to show you my masterpiece!") and flashed him my phone. No reaction. He was calm. I think too many idiots who broke their iPhones told him the same line. He smiled, just took my phone and looked at it. 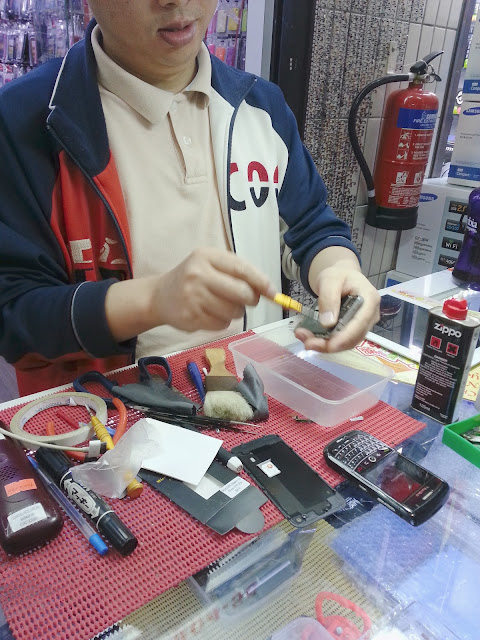 Without much effort and without me realizing, he had already taken out the back cover and was starting to dismantle the rest of my phone. 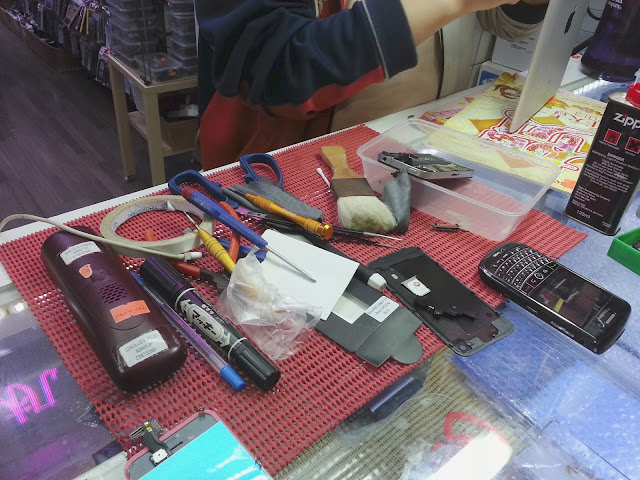 Multi-tasking between an iPad2, a Blackberry and my iPhone. Lol. 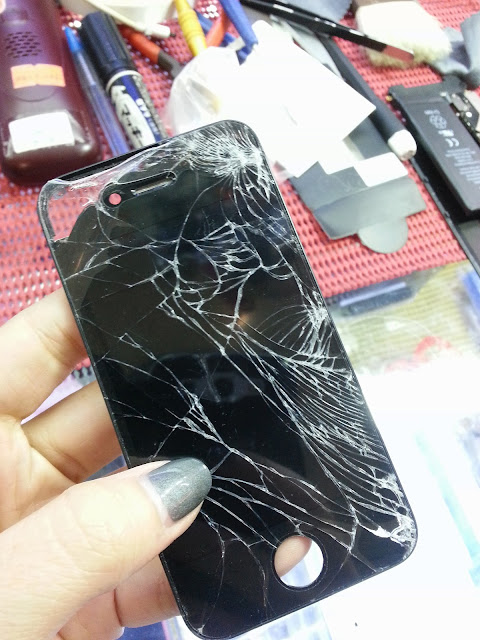 The front piece of the phone, or what we call the glass? LCD screen?

Ever seen the back of the LCD screen? You will never dismantle the iPhone yourself unless you are a professional, so here's how it looks: 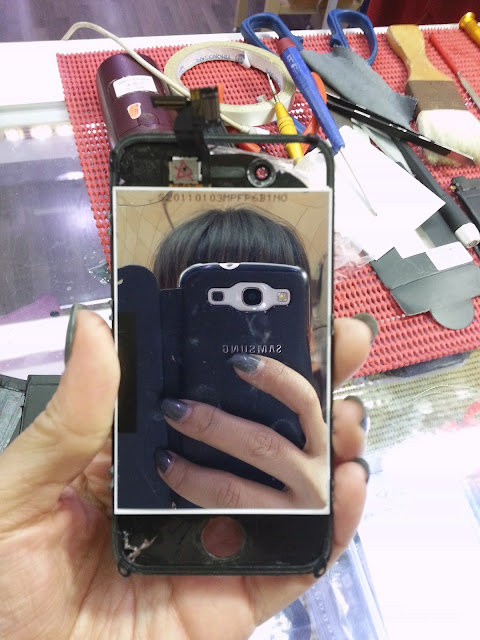 I'm amazed at how this thing allows messages, pictures, and everything else show up on my phone screen. *swakoo*

I told him I was worried that he might not be there anymore, and that he should just keep doing this as after checking out many places, I realize his price is really the best. He changes so many screens per day he doesn't remember how many he does. I asked. He said there are whole families that come and give him like 5-8 devices to fix at once. All with broken screens. O.O 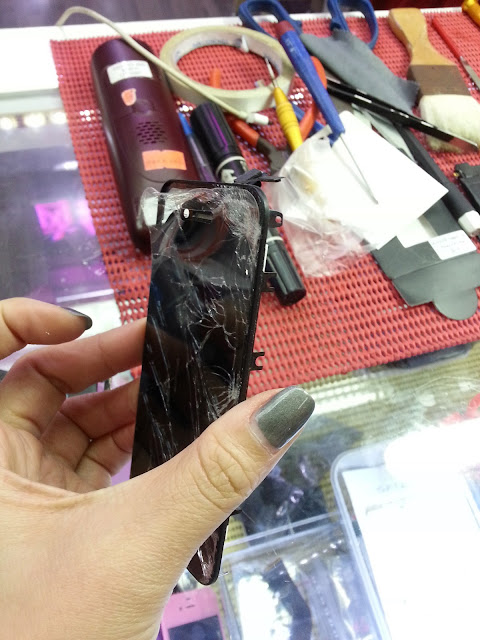 Told you it was really just the screen protector holding it together. =P

Wait. Do you see the pink iPhone in the top picture? 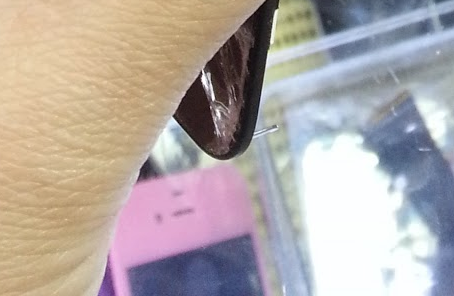 He also does colored glass/LCD screens. You know your iPhone is either black or white right? He has pink, purple, blue, etc coloured glass. So instead of the usual black/white, you can just go and change your phone color and you'll have a colored iPhone, without using skins. =)

While he worked, I went in to take a look around the shop. In a few minutes he had more people surrounding his counter with various tech devices. 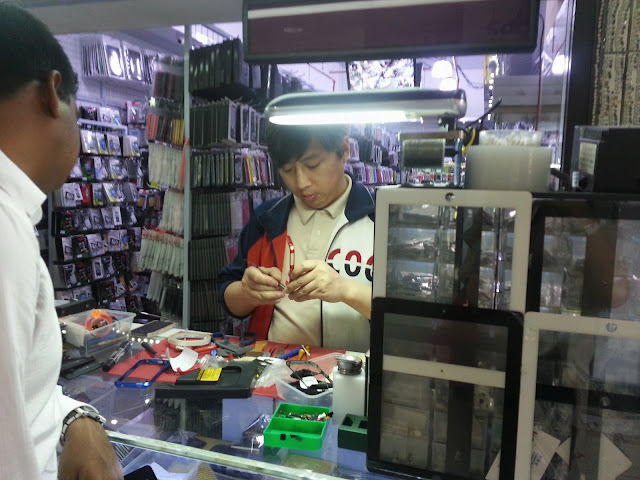 For curiosity's sake I asked him if he repairs all smartphones and tablets. He does MOST. And not just screen replacement btw. For eg, if your iPhone Home button is not working he can fix it too. As long as the model is not too new, and there's stock for the repair. He didn't use to do iPhone 5 because he said when it first came out the cost of the screen was too high, and he would be charging almost the same price as Apple Store (~$400), but now that prices for the screen has dropped, he can now replace broken screens for his iPhone 5 clients at S$250.

He even took the initiative to check my battery for me. Turned out my battery was a little "swollen" (it'll look like there's air/liquid inside). Battery packs, if overcharged or old, tend to "swell up", and they lose their efficacy over time. If you have been using your iPhone for a long time and you find that you need to charge it more often, chances are you need to change the battery pack. 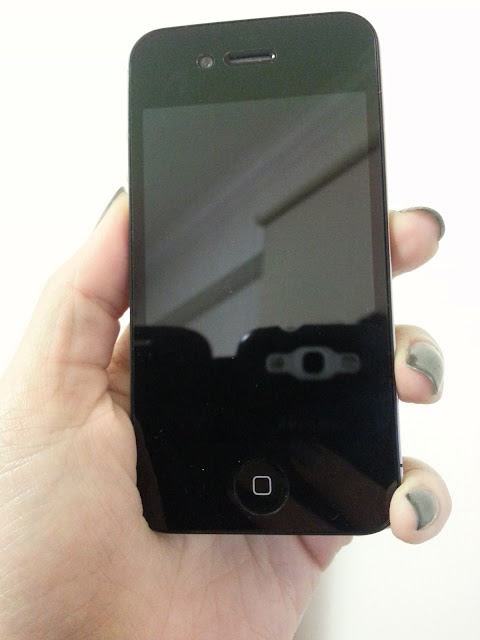 So I changed my iPhone 4S battery into a new one, and got a new screen, and all for just S$100. His workmanship was very nice and clean too!

Definitely recommended if any of you has a shattered/broken screen.
Chances are, you would have wanted to take it to the service centre but you were too lazy or it was too troublesome or you were too busy or you have been looking for a cheap replacement and over time you just got used to looking at texts and pictures through the cracks. Admit it. Lol.

The guy's name is Ivan Han, and you can find him at